During the current global crisis the PUBLICATIONS for sale are only shipping to  AUSTRALIA, CHINA, JAPAN, KOREA, SINGAPORE, HONG KONG, MALAYSIA, UNITED STATES, CANADA,  UNITED KIMGDOM, IRELAND and MAJOR EUROPE. INTERNATIONAL SHIPPING IS BY EXPRESS POST with minimal delays. I can place on HOLD books for you until the situation is rectified and Australia Post is again shipping to more countries.

PAYMENT OPTION:  Bajakhana offers a request by email for a PayPal invoice to be sent to you for payment.

2. Buy direct from eBay Listing:  eBay LINK
3.  A request by email for a PayPal invoice to be sent
CONTACT:   sales.bajakhana@bigpond.com

Revised, Corrected and Expanded Edition with a Lacuna of the first known disc recordings of Tibetan performers

The Gramophone Company’s First Indian Recordings 1899 to 1907, is a discographical study of Indian recordings taken in London in 1899 for E. Berliner’s Gramophone, and at various places in India between 1902 and 1907, detailing all the known or traced recordings of several dialects and musical styles together with a study of the history and development of the sound recording industry in India.

This newly revised study contains numerous additions and corrections, in particular, to the variety of alternate pressings made of these recordings.  With illustrations in the text.

Preface to the new edition

When this work was originally published my friend and confidant in all matters concerning discography, the Late Frank Andrews, had advised me that the registers from which a bulk of the information had been gleaned from numerical registers originally maintained by the Hanover factory where the records were pressed.

Sometime later I discovered registers at the Dum Dum factory that gave a different perspective on which recordings were re-pressed at Sealdah, Calcutta.  These hand written numerical registers were difficult to read and interpret, however, when assembled, the information revealed that there were more reissued and repressed recordings made at Calcutta, than had been originally documented in the earlier edition.


2. Buy direct from eBay Listing: eBay LINK
3. A request by email for a PayPal invoice to be sent
CONTACT:   sales.bajakhana@bigpond.com

An encyclopedia of the 78 rpm record labels produced in India and elsewhere, covering all known record labels and histories of the producing concerns from 1899 through to the late 1960’s.

With a Supplement on the numerical series of the major labels, and an Appendix on the record labels of non-Indian and Asian repertoires made in or associated with India.

With examples of most record labels (in full colour, or black and white if no colour examples available).  Bibliographical references and Index.  Many illustrations in the text.  20+500 Pages.


2. Buy direct from eBay Listing:  eBay LINK
3. A request by email for a PayPal invoice to be sent
CONTACT:   sales.bajakhana@bigpond.com

A Discography of Hindustani and Karnatic Music
Compiled By:  MICHAEL S. KINNEAR 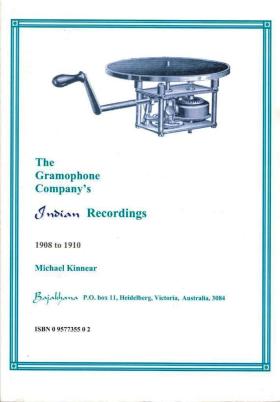 A complete numerical catalogue, by matrix serials, of Indian Gramophone recordings made from 1908 to 1910, detailing all known and traced recordings by The Gramophone Company, Ltd., in  India.

This is the second volume in the series of discographical studies on the recordings taken in India and released by The Gramophone Company, Ltd., of Indian repertoires, together with a detailed historical examination of the development of the sound recording industry in India up to 1914.

The historical background attempts to provide an in-depth view of how the sound recording industry in India was established and developed along with information about the several recording sessions described in the discography.

The Appendix defines the block numbering system used by The Gramophone Company, Ltd., to catalogue the recordings that were issued, un-issued or otherwise transferred to another series, between 1899 and 1930, for all recordings that might be classified as Eastern or Oriental.  Essentially the block numbering system applies to all repertoires, which are written in non-Roman script.

With appendices on numbering blocks and matrix serials.

CURRENTLY AT PRINTERS – AVAILABLE FOR SALE IN NOVEMBER, 2020 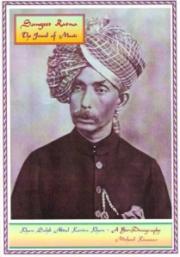 A Biography and Discography of Khan Sahib Abdul Karim Khan (1872 – 1937) – with numerous rare and previously unpublished photographs. The discography details all Abdul Karim Khan’s recordings from the 1905 sessions for The Gramophone & Typewriter, Ltd., and the 1934-36 sessions for the ‘Odeon’ label – through the Ruby Record Co. Bombay. With details of un-issued recordings, out-takes, and reissues.

CURRENTLY BEING PREPARED FOR REPRINT IN EARLY 2021

Mr. Michael Kinnear has published this book from Australia recently. Around 1973, Mr. Kinnear chanced to listen to Abdul Karim Khan’s gramophone records and was fascinated with the music. He then decided to write a bio-discography of Karim Khan. This book is the outcome of painstaking research conducted over thirty years.

Khan Saheb Abdul Karim Khan (1873-1937) was a legendary Indian vocalist of the 20th century. Born in the village of Kairana in North India, Abdul Karim Khan left his native place in 1890, never to return. He spent most of his active life as a musician in Maharashtra. Initially he served in the state of Baroda state. He had to flee from that service due to his association with Tarabai Mane, a student who was also a member of the Baroda royal family. They settled at Miraj in south Maharashtra. He established Music schools (Sangeet Vidyalayas) at Belgaum, Miraj, Pune and in Bombay. He also pioneered ticketed shows of classical music. These were organized in order to collect funds in aid of the schools that he had established. He also served in the state of Mysore, where he was honored with the title ‘Sangeet Ratna’.

This book traces the life of Karim Khan, and his pioneering work as teacher, researcher, and popularizer of Indian classical music. Half the book is devoted to his musical as well as personal life. His wife Tarabai Mane left him in 1922. She worked hard to set up careers in music for her five talented children: Abdul Rehman (Sureshbabu Mane), Champakali alias Champutai (Heerabai Barodekar), Gulab (Kamalabai Barodekar), Sakina alias Chotutai (Saraswati Mane {Rane}) and Abdul Hamid alias Papa (Krishnarao Mane). The separation was a big jolt to Karim Khan, and although he continued his career, his music changed after that, and became full of pathos and sorrow. He later married another disciple, Bannubi Latkar, and settled in Miraj. He passed away on a railway platform in 1937 while returning from a concert tour from South India.

The second half of the book describes his gramophone records (discography). Khansaheb made recordings in two sessions – first in 1905 in Bombay at S. Rose & Co. – a place near the present location of Rhythm House, opposite the Jehangir Art Gallery. He cut 32 songs, each of 90-150 seconds duration. The singing on these early records is quite forceful and exhibits his skills at a very young age. About 22 of these songs were reissued by HMV in 1994 as part of the ‘Chairman’s Choice’ series. He then refused all other offers for recording. In 1932, however, Bai Sundrabai persuaded him to cut records for the German Odeon company, then conducting recordings in Bombay. During 1932-36, he recorded over 25 songs, each of 4-5 minutes duration. These included classical, light classical, Marathi drama songs, bhajans, Canarese songs as well as instrumental music for the Been.

Michael Kinnear gives a detailed and professional discographic account of the records, along with label photographs of discs and of the test records that were sent to Karim Khan for his approval prior to issuing in market.

This book also gives an historical account of several important events that took place in Karim Khan’s period. We have details about the lives, professional careers, and recordings of Tarabai and her children, Abdul Karim’s brothers Abdul Latif and Abdul Haque, his uncle Abdul Wahid Khan, as well as other vocalists of the period, such as Rahimat Khan Huddu Khan, Roshan Ara Begum and Saraswatibai Mirajkar (Bannubai Latkar).

The book is lavishly decorated with a large number of black and white photographs and maps, as well as a nice portrait of Karim Khan on the cover. The back page shows Karim Khan in a recording session for ‘Odeon’. In 1973, in commemoration of Abdul Karim’s birth centenary, Mr. Balkrishnaboa Kapileshwari published a 900-page book on Abdul Karim in Marathi. An English translation was published subsequently. However, there has been no other books before this on his life, music, and records. Khan Saheb’s records have been reissued in LP and cassette format, and now on compact disc. This book will provide the listeners with an account of Abdul Karim Khan’s life, and add to their listening pleasure.

Nicole Record
A Discography of the Nicole Record & History
By:  MICHAEL KINNEAR
20+288 Pages 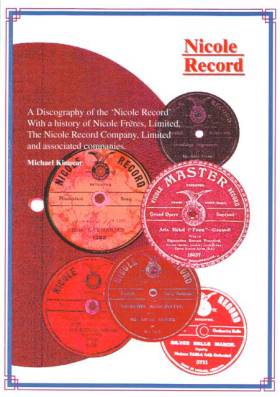 A discography of recordings issued on the ‘Nicole Record’ and other labels.

A numerical listing of all known recordings produced by The Nicole Record Company, Limited, from 1903 to 1906, together with information about reissued and transferred recordings.

With Bibliography and Index, Index of Performers, Illustrations in the Text, Supplement. 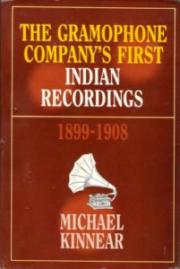 A discographical study of Indian recordings taken in London in 1899, and at various places in India between 1902 and 1907, detailing all known or traced recordings.  Together with a study of the history and development of the sound recording industry in India.  With appendix and indices. With illustrations in the text. 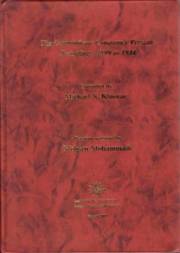 A Farsi (Persian) version of this book has been prepared and produced by Mohsen Mohammadi (as co-editor) with corrections and modifications and published in Tehran, Iran.

A Discography of recordings taken in Persia by The Gramophone Company, and its successor concerns, from 1899 to 1934.  With a history of the activities of various recording companies who operated in Persia and the sessions conducted at Teheran and London of Persian repertoire.

With a supplementary discography of recordings Persian taken by the Columbia Graphophone Co., Ltd., between 1928 and 1934. With appendices on numbering blocks and matrix serials. with illustrations in the text.

A Discography of recordings produced by the International Zonophone Company, and associated concerns in Europe and the Americas from  1901-1903. With a history of the company’s international activities, and a Supplement on reissues and transferred recordings.

With Bibliography and indices. With illustrations in the text.